Ohio is the Midwest’s powerhouse for economic growth and development. The southwest region, in particular, is a key player. This region, that includes Cincinnati and Middletown along the I-75 corridor, represents exceptional business location, expansion and relocation opportunities available making it is one of the largest industrial, distribution and manufacturing areas in the United States.

According to Site Selection magazine, Ohio was awarded the coveted Governor’s Cup four times (2006-2009) for being the U.S. state that achieved the greatest number of business expansions each year. It also placed in the top four among all 50 states in the last six years.

In 2011, Ohio led the U.S. in new manufacturing facilities and expansions. Ohio’s re-engineered approach to business development and a focus on R.O.I. has helped to make Ohio an attractive option for companies looking to compete worldwide.

More companies have invested in Ohio than any other Midwest state, with more than $30 billion invested in business expansions. It underlines the fact that successful companies around the world are choosing Ohio as the best location for their U.S. operations.

Why have more companies invested in Ohio than in any other state?

Ohio tops the list of manufacturing states in the nation. Due in part to the “geographic clustering” of companies in similar industries, manufacturers have an edge that allows them easy access to the resources, logistics and the services they need.

Ohio has the lowest business and capital investment tax rates in the Midwest. Businesses that take advantage of Ohio’s incentives that include tax credits, loans, business grants, and economic development programs are often able to reduce operating costs which, in turn, improves productivity and profitability.

Ohio Enterprise Zone. Program offers local communities the opportunity to work directly with local companies to provide real estate tax incentives to encourage the retention and expansion of business in the region.

Resources that you can use

Ohio is a Great Place to Do Business 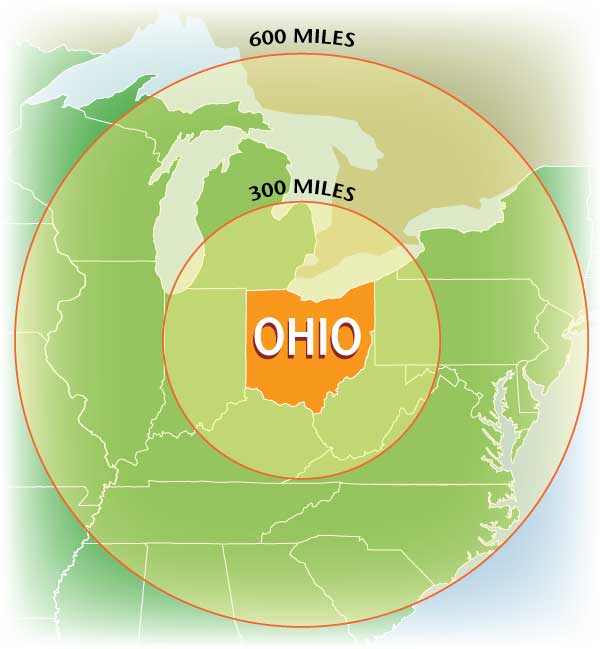 Nestled in the nation’s heartland, Ohio is within a 600-mile radius of 53 percent of the entire U.S. population and 44 percent of all U.S. manufacturing facilities.

Southwest Ohio is the ideal location for manufacturing and distribution. It’s centrally located to customers and suppliers; taxes are lower for manufacturers; the workforce is skilled and educated; and the state offers many incentives to attract and keep businesses in Ohio. Learn why national and international companies choose to locate in the region: Southwest Ohio: Highway to Profitability

Learn more about our state: